(Two posts in the same day! Don't miss my previous post about the cpap.)

Someone who doesn't want to be identified, paid my new member fees and 3 months of membership at the gym!!! There are just not enough exclamation marks to express what this means to me!

It has been about TWO YEARS since I've been to the gym. I got pregnant, had a baby, was busy with dad's illness, then frankly I was just too broke to go, plus I needed help in the childcare department.

But things are starting to come together! The gym membership, and then also someone else is paying half the tuition for my baby to attend Mother's Day Out once per week from 9-2!!! I will use that time to exercise and work on the book I'm writing (about the relationship dad and I had, and the crazy adventure of his death).

Hubby also said he would make sure I was able to go to the gym one other night per week AND mom said she would watch the baby one hour early on TOPS nights so I could go then----- We are looking at 3 times a week people! Woot Woot! Happy dance!

Here's the deal--- I do the Founder's Day 5K every year, regardless. For the past two years, that 5K has been low priority. Seriously, with pregnancy and being caretaker for a terminally ill parent, it was pretty much one week before the 5K I go for a long walk and then I walk the 5K and then it is over.

When I started doing the Founder's Day 5K, it was in response to a challenge. After that, it was important to me to do it each year because I KNEW I would get better each year as my health improved. I also did a Cancer Center 5K in October. Point being, 5K's are important to me (certain ones.... I'm picky LOL Just the Founders Day and the Cancer Center)........so I make sure they happen, but life sometimes put my dreams of improving from year to year on the back burner.

Having a gym membership means I'm going to actually get to TRAIN for the 5K this year. That means a lot to me. I am having a hard time finding words to express the emotion.

It means there is time for ME.

It means I am taking care of myself.

I got on that treadmill and told myself I would do one hour, which is how long I told hubby I would be at the gym. Would I be able to cover 3 miles in that hour? That's a pretty slow pace, but my exercise has been pretty much nonexistent for a LONG time.

Of course, first I had to go to the bathroom and take "first day back at the gym" selfies. I was wearing a light jacket because I THOUGHT it made me look smaller. I was wrong! I took side and front views, some with jacket on and some with jacket off.

My front view with the jacket.............is hideous. WOW. I'm THAT big? I don't feel that big. humph. That picture will not be posted today. I just can't. I can't say "this is me". I must wait until I have gotten at least some smaller and can post a side by side comparison and can say "this WAS me". 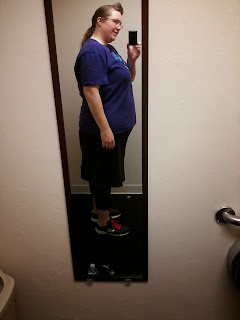 I think I weighed 284 pounds. In one hour, I walked 3.04 miles. (While watching Undercover Boss and HGTV)

And then, before I went home, I took an "I just did an hour at the gym and I'm exhausted!" selfie. 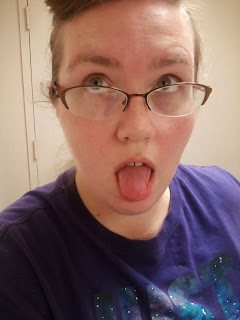 But the exhaustion was WONDERFUL! It is the kind that makes you believe, makes you dream, and makes you eat clean.